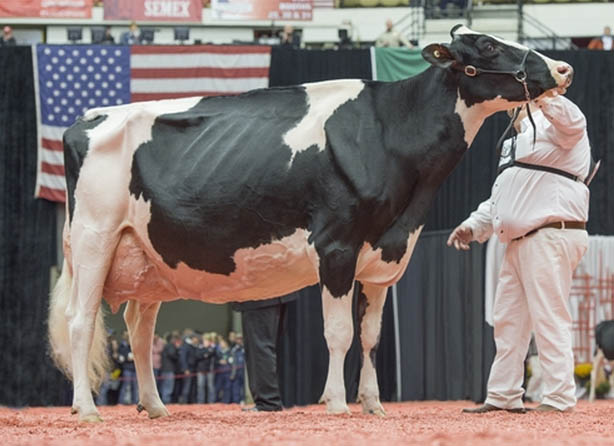 The world’s undeniable ‘King of the Ring,’ Braedale Goldwyn, captured World Dairy Expo’s Premier Holstein Sire banner for a record seventh year (dating back to 2008 when he was one of the youngest and highest ranking TPI sires to ever win the award).

With a career that strengthens as the years go by, he sired 33 daughters in the top 10 and 21 in the top of five placings in their classes. This included five class winners, and for the fourth year in a row, he sired the Grand Champion Female. Two-time World Dairy Expo Grand Champion RF Goldwyn Hailey stole the show once again, topping her Aged Cow Class and parading to champion honours. Flanking Hailey were two other Goldwyn daughters, 1st 5 Yr Old, Lovhill Godlwyn Katrysha, who was named Res. Grand Champion and Jacobs Goldwyn Valana, 2nd 5 Yr Old and Best Bred & Owned of the Show, was named Honourable Mention.

Semex’s lineup of Show Time™ sires went beyond Goldwyn, with 27 different Semex sires on display, 78 daughters placing in the top 10, 10 class winners, six Best Udder in class awards and seven of the top 10 placings in the four milking classes!

Other impressive results include 10 class winners from the first to the last classes of the day by four different Semex sires:

With top placings in all classes from a variety of sires offering both profitability and longevity, Semex and the code 200 sires really are Genetics for Life.