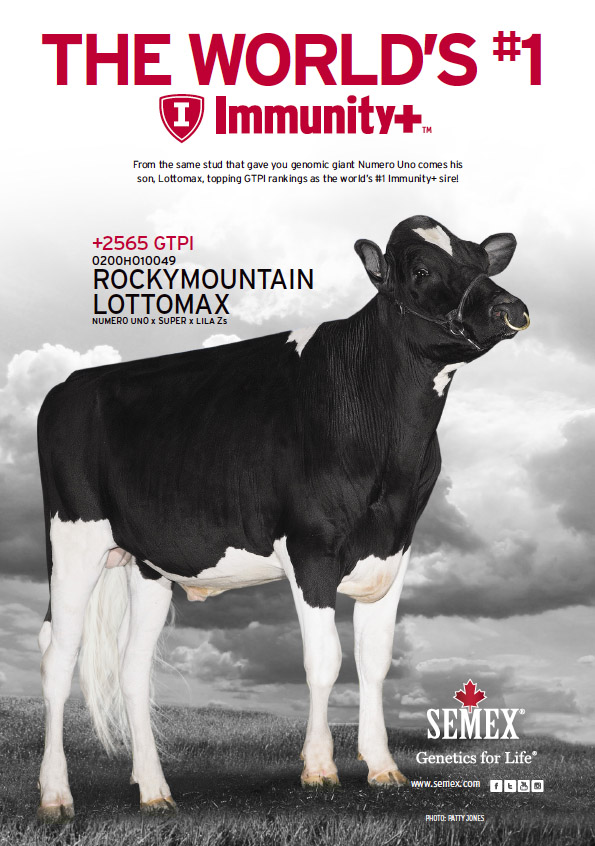 Semex is excited to announce the release of the World’s #1 Immunity+™ sire, the international genomic superstar 0200HO10049 Rockymountain Lottomax. Semex’s rigorous genomic selection program has resulted in some of the most sought after young sires worldwide including Lottomax’s sire, the genomic giant himself, 0200HO07450 Amighetti Numero Uno.

Available worldwide May 1, Lottomax delivers on Semex’s promise of Genetics for Life to our partners, clients and genetic suppliers. Topping GTPI rankings at +2565, he is the World’s #1 Immunity+ sire and joins his own sire in this coveted lineup, siring daughters with less disease building more profitable, longer-lasting herds. All this, along with an impressive +926 NM$ and 0.13% F and breed-leading combined PL and PTAT of +7.8 and +3.52 respectively, make Lottomax one of the hottest young sires in the world.

Having an exceptional maternal line is a common thread in each of thousands of young sires Semex genomic tests each year, and Lottomax’s maternal line is without question exceptional. His dam is a VG-85 Superstition x VG-88 1* Baxter x EX-91 11* Shottle x the famous EX-94 18* Lila Z herself.

“At the time of the mating, Super Leita (Lottomax’s dam), was a high-ranking heifer and already on an IVF program,” says Sire Analyst Mike West. “The granddam was a very impressive cow at 87 points in her first lactation, and she’s a descendant of the one and only Lila Z, making the pedigree attractive. When Numero Uno became available as a mating sire, the match up with Super Leita for genomics and phenotype was great!”

“Lottomax is a bull that fits well in the marketplace, offering health, fertility, production, type and the stability of a great cow family,” says West. “As an Immunity+ and HealthSmart™ sire, he offers dairymen a decided advantage, and not just on his genetic profile, but with his ability to sire healthy and profitable cows.”

As part of Lottomax’s release, a minimum purchase of five doses is required at $150 US per dose. Contact your Semex representative regarding availability and localized pricing.