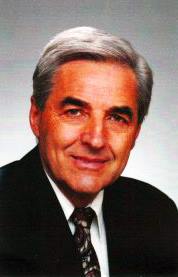 It is with profound sadness that Semex and EastGen announce the passing of a prominent figure in the legacy of our companies. Wilbur Shantz passed away peacefully on the morning of July 19, 2015, at the age of 87.

Born on a farm in Pinehill, Wilmot Township, Wilbur began his career in 1952 as a technician inseminator with the Waterloo Cattle Breeding Association. In 1963 he was named General Manager of that organization. In 1968 (after an amalgamation of the Lambton, Waterloo and Central Cattle Breeding associations), Wilbur was chosen for the role of Operations Manager of United Breeders Inc. (UBI), Guelph, Ontario. Recognized for his great leadership skills and business sense, he was appointed General Manager of UBI in 1985, a role he continued to fulfill until his retirement in 1992.

Well-respected within the A.I. industry, Wilbur served on several boards of directors and was past president of the Ontario Association of Animal Breeders (1965 & 1966), Canadian Association of Animal Breeders (1990), and Semex Canada (1992) prior to the forming of The Semex Alliance. Wilbur also assumed the role of Interim General Manager of Semex Canada from 1995-1996.

“Wilbur Shantz will be forever recognized as a leader who was instrumental in building a strong foundation for the Canadian bovine genetics industry that today is recognized as a world leader,” said EastGen General Manager Brian O’Connor. “Wilbur was highly regarded for his business acumen but perhaps his greatest legacy is seen through the individuals that he developed and mentored during his career. Wilbur had a special way with people – he endeared himself to all producers and staff that worked with him.”

Among his many achievements, Wilbur was recognized with an Award of Merit from the Canadian Association of Animal Breeders.