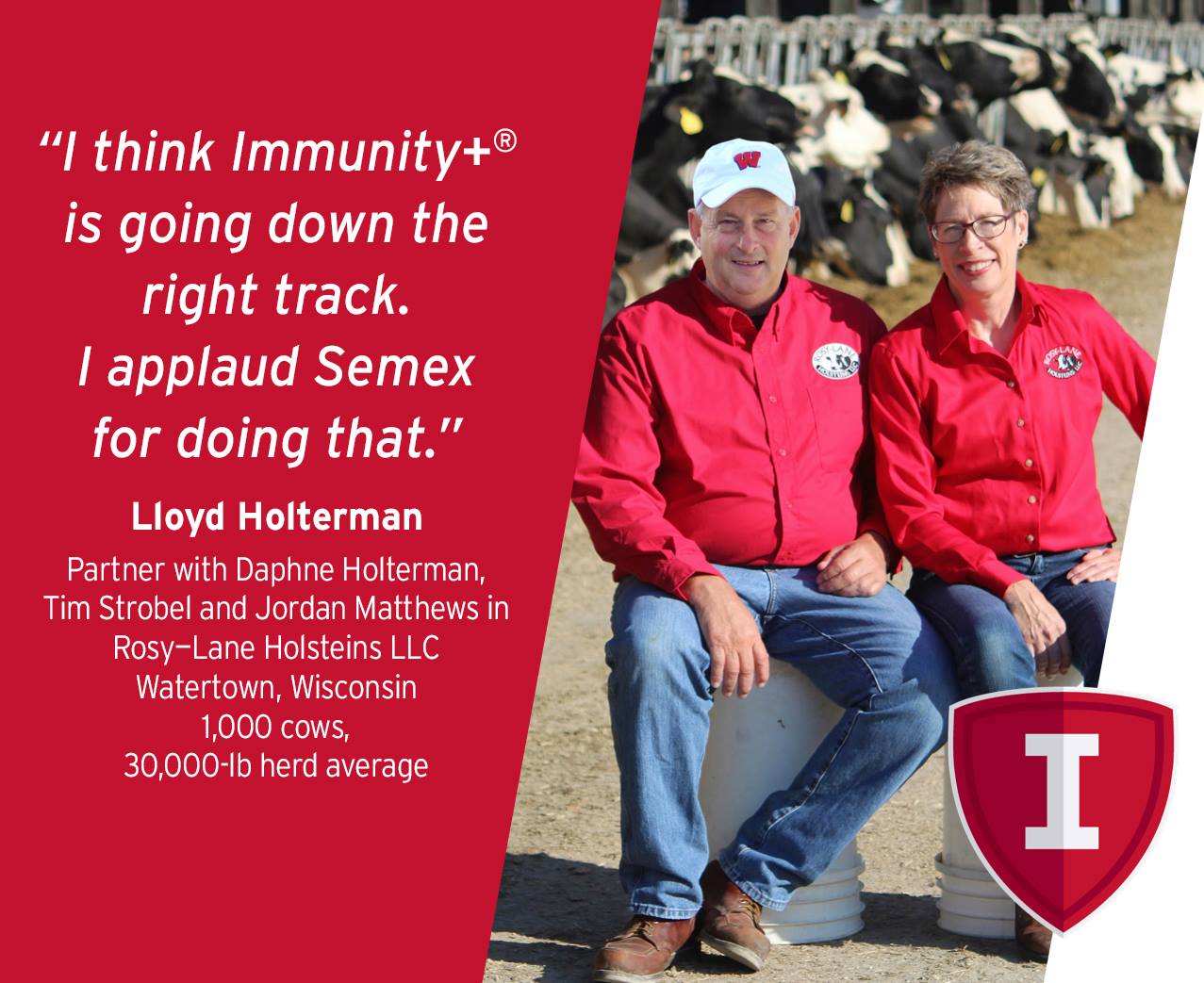 
Rosy-Lane Holsteins LLC in Watertown, Wisconsin, USA was all about health traits long before most people talked about selecting for healthier cows. And, while the US was focusing on TPI (jokingly referred to by Lloyd in those days as being synonymous with tall, pretty and infertile cows) as the way to improve longevity, Lloyd and Daphne Holterman began blazing their own trail, breeding cows that worked for them, and keying in on a brand new genetic trait called Productive Life (PL) and shortly thereafter, Daughter Pregnancy Rate (DPR).


After all, says Lloyd, “You need to select directly for the traits that make cows last,” as opposed to indirectly via type traits. Becoming a NM$ enthusiast, Lloyd’s pursuit of profitable cows was based on using his own on-farm data to guide selection decisions. Today, most of the rest of the world has caught up to this philosophy and the importance of health traits within a breeding goal. Still, with a big head start, clearly it is immensely satisfying for Lloyd to have AI companies and individual breeders interested in top ranked genomic animals from his herd.


It was 1992 when Lloyd first opted for the road less travelled; that proverbial fork in the road. For many years he continued to work within his own breeding program, selecting the types of bulls that worked for him. With bulls like Manfred, Oman, Lynch and Ramos, he blazed his own trail. Increasingly, this led to disappointment during classification visits where his kind of cows, the kind that worked best at Rosy-Lane, were often not appreciated. However, the health traits he focused on steadily improved. This selection philosophy, along with his diligent focus on management, netted enviable results. With death losses now typically in the 3% range, a culling rate hovering around 20% and somatic cell counts averaging just over 100,000 on his 1,000 cow herd, the 30,000 lb average he generates per cow rivals the most efficient herds anywhere. And, even in times of low US milk prices, he generated a three year average of over US $800 profit/cow/yr (2014-2016).


A few years ago, Lloyd put Semex’s highly-ranked NM$ bull 0200HO06528 De-Su Nominee, who also happened to be an Immunity+® sire, to work on his farm. While it was just one bull, Lloyd was curious enough about what he had heard and read about Immunity+ to track results and create his own real world data. He was astounded by what he found, and makes a point to include the data on the many speaking engagements he and his wife Daphne take part in. Included is a summary of the info Lloyd provided on the Nominee progeny born between July and October 2014.


On the research that lead to the creation of the Immunity+ Lloyd is clear, “I think it’s going down the right track. I applaud Semex for doing that.” Lloyd is also keen to be an early adopter herd of the recently released Semex genomic testing service, Elevate™, that includes a female genomic Immunity test.


How will he use it? Lloyd has already adopted a rigorous culling program, eliminating all animals under 700 NM$ at two days of age. Genomic testing is used on most of those that remain. It means 35% of the calves born at Rosy-Lane are not reared. That’s still a foreign concept for most operations, but for Lloyd, there is no money to be made in rearing heifers he does not need.


“I started farming in 1981 and I never thought I’d see the day a heifer calf would be worth less than a bull, but that’s the current situation in the US,” he laments. Holterman has also begun using a fair bit of beef semen. After all, with a 20% cull rate, he really doesn’t have need for the number of replacements he could be producing.


Lloyd and Daphne are big believers that when your values, goals and business plan all overlap, you get the maximum satisfaction out of life. In high demand for speaking engagements in many quarters worldwide their farm’s tagline says it all… Great People, Great Cows, Great Returns.