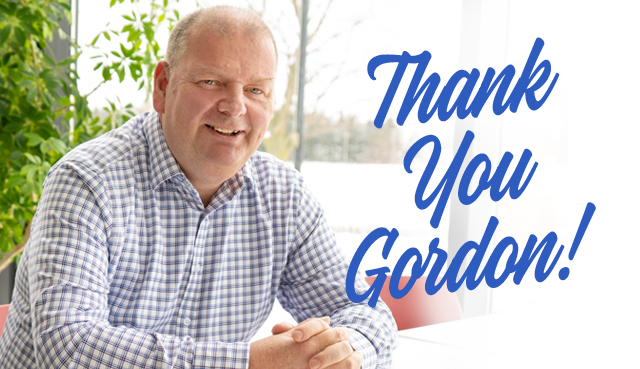 Gordon says, "Thirty years ago a very green city boy joined Semex UK as company accountant from the accountancy firm EY. I was this young man and I knew a bit about Semex as I had been involved in their audit for three years. It was the charismatic leadership of the Semex UK's owner Drew Sloan that attracted me to the company."

"When I joined I was not disappointed. Semex UK was a vibrant, forward-thinking company that was punching way above their weight with marketing ideas well ahead of their time. It was not a genetics company but a marketing company that just happened to sell genetics. The dairy industry was on a high, milk prices were strong and there was lots of margin in the semen business, not just in the UK but around the world."

"In September 2000 I left Semex for a good job in banking with RBS (Royal Bank of Scotland) and went on to manage the high-risk team for RBS dealing with distressed companies. It was a great experience and really taught me about what it took to run a successful business. Seven years later Paul Larmer asked me to rejoin Semex as Managing Director of Semex UK. It was a big decision to leave the bank, but I had unfinished business at Semex. I knew there were still great people at Semex UK and that Semex still had a great product. And, so it has proved! Under the leadership of Paul Larmer, Semex has changed dramatically."

"Six years ago I was asked by Paul to take on the leadership of our Global Sales Team first as VP, and then as Sr VP of Sales and Business Development. It has been an honour and a privilege to lead the Global Sales Team, seeing growth in each of these years. We have a great team of people who have responded to the changing market conditions we face and the market gets tougher every day. Farms get bigger, customers expect more, milk prices are not rising and as a result neither is the value of a straw of semen. The product mix is changing with more sexed semen and beef semen taking the volume away from conventional semen. Technology is driving change and the new generation need to be technically aware if they are to have a future in the industry. I am proud of the way our team has responded to these changes."

"As I step back at the end of March, I leave with a heavy heart but with great memories. Semex has been very good to me and I could not have wished to work with a better group of people. Semex has great people, great products and with the support of our owners a great future!"