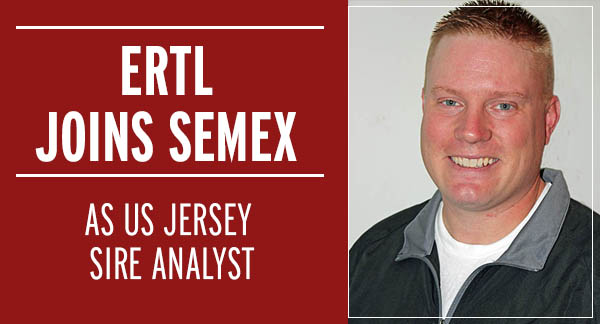 Semex is pleased to announce that David Ertl has joined the Semex Jersey Team as the US Jersey Sire Analyst effective Monday, September 30, 2013.


In this role, David will report directly to the Jersey Program Manager, and will be responsible for executing Semex’s Jersey sire selection and acquisition strategy in the US. This newly created position supports Semex’s growing Jersey Genomax™ program, ensuring Semex continues to obtain the breed’s best genetics. Additionally, David will be working directly with the Semex Team from coast to coast, supporting sales and providing Jersey knowledge and genetic expertise.


David was born and raised in Ohio, attending The Ohio State University where he obtained a bachelor of animal science degree with a minor in agricultural business. Following graduation, David was a herdsman at a central Ohio commercial dairy, providing cow-side diagnostics and treatment as well as whole herd and employee management. His own herd, Ertl Jerseys, has ranked in the top 25% in the nation for JPI, and has had numerous bulls enter stud including 0200JE00180 Ertl Mantra, a top 20 G-code bull that is part of Semex’s Genomax and Immunity+™ lineups. Additionally, David was awarded the 2011 Young Jersey Breeder Award from the American Jersey Cattle Association. Most recently, David worked for Sexing Technologies as Director of Nutrient Management at their Ohio Heifer Center.


“We could not be more excited to add David to our Jersey Team,” says Russell Gammon, Semex Jersey Program Manager. “With his practical knowledge of modern dairy farming, a world of energy and drive, and an ocean-deep knowledge of the Jersey breed, David is the perfect choice for this position! Semex’s Jersey program is expanding year after year and now with David on board, we look forward to even greater successes and accomplishments.”