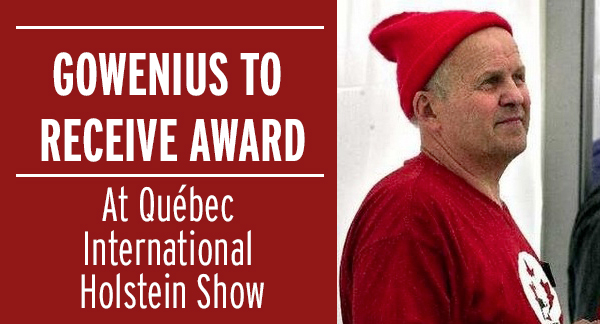 The “International Friend in Dairy Breeding Award” acknowledges the significant contribution of a person from outside Québec to the promotion of Québec dairy breeding. Mr. Jan Gowenius from Sweden will be named the 2013 recipient within the 19th edition of EIHQ. A highly skilled man, Mr. Gowenius has left his mark on the international level while maintaining good relationships with the world of Canadian genetics.


Jan Gowenius saw his first Canadian cattle while he was following an AI course in England. Impressed by their quality, he went to Canada and imported 40 purebred Holstein calves. He had a goal: to build a herd of purebred animals out of Canadian genetics in Sweden. In 1983, when the first purebred calf was born, the new “Gårdsby Holstein” herd was established. In order to increase the herd more rapidly, Mr. Goewnium and his wife Monika went to Canada in 1986 to take an embryo transfer course. This was the first course and the beginning of the Semex ILMS School!


In 1987, they were chosen to be Semex representatives in Sweden for the Holstein breed. In 2000, Semex asked them to start selling in Finland, and so they did. After 10 years, “Semex Finland” was established as a new company. In 2012, they completed 25 years with Semex Sweden.


Mr. Gowenius has been visiting Canada and Canadian breeders since 1983. He came to Québec and CIAQ each year since the beginning of the Québec International Holstein Show. This is his favorite place, the place where he has the most Canadian friends!


The organisers of the Québec International Holstein Show raise their hats to this highly skilled man for his work in cattle breeding!