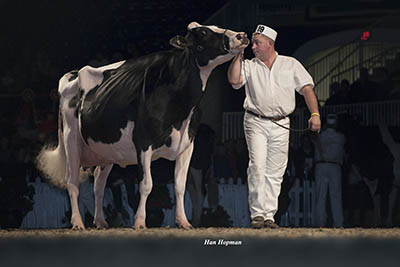 On the heels of a remarkable World Dairy Expo and an impressive show season, Semex’s Show Time™ sires once again demonstrated their prowess in Toronto last week at the Royal Agricultural Winter Fair, with three breed champions competing for Supreme Champion accolades!


Impressively 200HO sires were on the top side of the pedigree in 58% of all animals shown by 24 different sires. Impressively, 93 of these placed in the top 10 of their classes, 52 were in the top five, 12 were class winners and seven captured champion titles! With a career like no other, Braedale Goldwyn continued his dominance of the National Canadian Holstein Show, capturing the Premier Sire Banner, siring 27% of the entire show as well as seven class winners. For the fourth consecutive year, a Goldwyn daughter was named Grand & Senior Champion Female as 1st place 4 Yr Old, Robrook Goldwyn Cameron, captured the blanket of roses and was named Best Udder of Show.


Other Goldwyn winnings include:


The Royal also featured numerous Semex sires that impressed visitors from the heifer classes through the Longtime Production classes. 12 class winners demonstrated Semex’s complete offering from the show’s beginning to its end including:

The Canadian National Jersey show was a showcase of 200JE sires, with Semex sires stamping their daughters with the show-winning look, including Bridon Excitation sire of the 2013 Supreme Champion of all Breeds, Page-Crest Exitation Karlie, the 1st place Sr 3 Yr Old. Other winnings include:

The Canadian National Ayrshire show resulted in nine class winners for Semex including the Grand Champion by Labrie Wilton, Steam-Valley Wilton Magic Bri. Other winners include:

With top placings in all classes from a variety of sires offering both profitability and longevity, Semex and code 200 sires really are Genetics for Life.