In the field, CIAQ Progeny Analyst Chris Studer describes Stallion daughters as very stylish cows. “These are tall, angular cows with great dairy strength. We like their shallow udders and strong ligaments with very well-attached fore udders. Dairymen will be very pleased with these daughters.”

“Stallions are cows that are open, angular and dairy with a nice rump and foot and a fine bone,” says Mike West, Semex Sire Analyst & Product Support Specialist. “Their udders show lots of rear udder crease telling us they’ll last through many lactations.”

Once again dominating the LPI listing, Semex Holstein sires capture 72 of the top 100!


Holstein Canada and Semex Alliance are pleased to announce that Sandy Cole of Middle Musquodoboit, Nova Scotia has been chosen to represent Canada in the 2010 Canada - Australia Young Adult Exchange program.

Sandy is a 2006 graduate of Olds College in Alberta with a diploma in Agriculture.  Since 2006 Sandy has been employed full time at the home farm, Colstein.  Sandy, along with his father Dean and uncle David milk 60 cows.

Over the years, Sandy has been very active showing dairy cattle at both the county and regional level.  As a member of the Central Nova Scotia Holstein Club, Sandy helped put on a clipping, showing and judging workshop.  Sandy has also worked at shows and conventions for a number of breeders including: Cobequid, Bernardale, and T&L Cattle Company.

Easy-going, personable and knowledgeable in all aspects of dairy cattle management, Sandy indicates that his future plans are to join the family farm business.  Sandy is well on his way by having ownership of 18 cows under the farm prefix.

“I'm extremely excited to be selected for this trip” states Sandy. “It is a great privilege and certainly a huge honor to be representing Canada on this exchange to Australia. This is a once in a lifetime opportunity that I know I will never forget."

Semex Alliance and Holstein Canada encourage all interested young adults between the ages of 18 and 25 to apply in 2010 for the following year’s program.

Don’t let semen handling be a “forgotten link” in your herd. Below are 12 steps herd owners and managers, herdsmen, inseminators and professional AI technicians can put in to practice to help get more cows pregnant.

Check the water bath temperature using a thermometer. Most semen packaged in .5-mL or .25-mL straws should be thawed in water 95˚F/35˚C.

Work at or below the frost line in the neck of the tank to minimize the possibility of premature thawing of semen straws. After locating and grasping the desired cane, remove the straw with tweezers. Quickly transfer the straw to the water bath, while gently lowering the cane back into the canister, and the canister back into storage position. When thawing more than 1 straw simultaneously, do not allow straws to touch in the water bath.

Semen should be thawed for a minimum of 45 seconds. Use a watch or clock to monitor the time.

Remove the straw from the water bath and dry thoroughly with a paper towel. Water will kill sperm. Cut the crimped end of the straw at a right angle, keeping the straw covered by paper towels during the process.

As you load the straw into the gun, very quickly check to make sure you have selected the right bull.

Pull the sheath over the gun and secure it with an o-ring or by twisting the sheath on the raised spiral. Be certain the straw is seated ... Read More...

Often when a herd is having reproductive problems focus is given to what is currently happening to the cows in the herd.  Sometimes, however, looking back on our historical data we can find the root causes of many fertility issues.

The transition period, for example, is the most critical time in a cow’s lactation.  It’s during this time that cows are at a higher risk of developing disease; and, disease during the transition time can lead to reduced production and fertility throughout the entire lactation.

During a herd visit last winter, we visited a dairy with excellent disease recording and calving information.  Unfortunately, though, this herd was battling reduced conception, especially at first service.  Luckily, part of their disease recording protocol included documenting all diseases that occurred to their transition cows.  To detect problems in the herd, an accurate starting point needs to be determined.  Having recorded all disease information using a herd management program such as Dairy Comp 305, an owner, herdsman or herd advisor can more efficiently pinpoint reproduction problems and their causes.

Metritis is a costly disease, reducing cow’s production and conception rates.  Research published by Overton and Fetrow (2008) showed that cows with Metritis were on average open for 33 days longer than cows that did not have the disease.  A 2006 University of Florida study ... Read More... 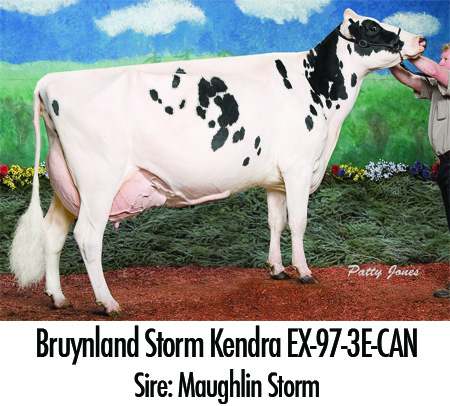 Semex’s iconic Maughlin Storm continues to make headlines more than 13 years after his initial proof as his 800th daughter scored EX this week.  Keriday Storm Sasha, like the 799 Storm daughters before her, has shown exceptional development, durability and strength netting her a score of EX-91-CAN in her fourth lactation.

An original Semex Master Series™ sire, this most recent accomplishment sets Storm well above all other sires in Canada, as the sire with the most EX daughters ever.  By comparison, his sire Madawaska Aerostar has 53 EX daughters from 22,856 classified and his grandsire, the breed patriarch Hanoverhill Starbuck, has 418 EX daughters from his 37,960 classified.

Storm’s statistics speak for themselves with 800 EX daughters of his 42,899 daughters classified, giving him an incredible 69% Good Plus or better ranking still today.  Among these daughters are some of the most tremendous and high impact cows of our time.  These cows have been and still are bull mothers, record milk producers, index toppers, brood cows, barn favorites and show winners.  Real cows working around the world.

As a sire of sons, Storm has proven himself again and again, siring nine Semex sires including modern day Master Series™ sires 0200HO07030 Ladino Park Talent *RC, 0200HO03067 Pursuit September Storm *RC, 0200HO04624 Brigeen Givenchy and former #1 LPI sire Hartline Titanic among many others.  On the bottom side of the pedigree, Storm’s genetics may make an even greater impact, being the maternal grandsire for 21 Semex sires, with superstar Braedale Goldwyn and his brothers included in the rankings.

As the careers of many of these sires are just beginning at Semex, Storm’s genetics and the value that he brings to dairymen worldwide is certain to continue for many ... Read More...

As a Semex Master Seriesâ„˘ sire 0200HO04779 R-E-W Buckeye has proven himself time and again.Â  With his second crop behind him, backing up his proof, we know that Buckeye has stood the test of time, exceeded breedersâ€™ expectations and is poised to make an impact on dairies seeking bulls with durability, reliability, efficiency and profitability assured in their proof.Â  Buckeye daughters are the real cows on real dairies that dairymen love to work with.Â  Sylvain Landryâ€™s Lansi Farms in Saint-Albert, Quebec has 958 head with his 370 cows milked by six robotic milkers.Â  Sylvainâ€™s Buckeyes are low-maintenance cows that work hard and breed back easily, contributing positively to the herdâ€™s bottom line.Â  Experience has shown Sylvain that that his Buckeye daughters are positive contributors that increase his profitability.Â  Â Â  "We have 83 registered Buckeyes,â€ť says Sylvain Landry Lansi Farms owner.Â  â€śRight from birth, we were immediately impressed by Buckeyeâ€™s calving ease. Â These calves werenâ€™t very big, but they showed lots of vigor and will to live. Â Weâ€™re now milking 22 Buckeyes.Â  They are very consistent and we love working with these young animals. They are very lively and are aggressive eaters who have adapted very well to our environment.Â  On average, they go to the robotic milker 2.6 times a day.â€ť â€śThey walk on excellent feet and legs with good heel depth,â€ť Sylvain continues.Â  â€śTheir rear udders are high, wide and well-attached, with a nice texture, a strong ligament with teats that the robot easily finds. Â Not only do they produce well, but they also reproduce easily. Â Seven out of 10 became pregnant within 69 days or less.â€ť â€śIn a large herd like ours, a cow that we forget about is a good sign!Â  This means she is trouble-free, breeds back quickly, produces quality milk and gets back into lactation easily. This is a challenge, but it seems simple for our Buckeye ... Read More...

As one of several Maughlin Storm sons proven at Semex, September Storm *RC was unique not only in his *RC status, but also because he was a son of the popular Shower family.  His dam was a VG-85-2YR-CAN 4* Astre from the EX-CAN 13* Glen Drummond Shower herself.  This pedigree made him the outcross sire many Red & White breeders had been looking for worldwide, making him popular before he even received an official proof in October 2002.

September Storm *RC quickly gained popularity in the Red & White show circles and sale rings.  His daughters dominated heifer and milking classes, earning several Premier Sire banners including the coveted Premier Sire Award at World Dairy Expo in 2007 and 2008.  Sale topping daughters by September Storm *RC have made their mark as well, reaching record breaking prices, with Fradon SS Jordan being at the top of the list at $150,000 in 2007.

“Not very often do you have a Red Carrier sire that could compete with the best Black & Whites, so September Storm became popular very fast with Red & White breeders,” says Pierre Laliberte, Semex Alliance Senior Vice President, Genetics and Research.  “His largest contribution to the Red & Whites may be that he was used by many Black & White breeders.  He will spread the red gene ... Read More...

In the USA and around the world low milk prices, plummeting equity and lingering high feed costs have left many dairy operators taking a hard look at all costs associated with their businesses, knowing that to be profitable today you have to be more than just efficient.

Cows once worth $2500 US or more are now being sold across the country for $1000 US or less, and springers are now valued at half of what they were once selling for… many times bringing less than $1200 US.

Tough conversations are happening in offices and around dinner tables every day in an effort to increase profitability, whether they’re milking 50 or 5,000 cows.

One of those conversations is whether or not it is worthwhile to pay a premium price for sorted semen, and the added value of producing your own replacements.

Each dairy’s situation is a slightlydifferent, but for Aardema Dairies in southern Idaho, the extra dollars spent is one cost they’re not willing to sacrifice.

The Aardema family along with their General Manager Jeff Wendler, and herd managers John Andersen and Jordan Leak continue to sort through
pedigrees and proofs to find bulls to meet their criteria to use in their herds to make top genetic heifer replacements.

Approximately seven years ago the AI industry as a whole purchased many sons sired by the popular Marathon BW Marshall. In October of 2005, Semex graduated several BW Marshall sons, but just one rose to the top of the TPI listing. 0200HO04779 R-E-W Buckeye has maintained his top TPI rankings, making him one of Semex’s most successful sires and another example of Semex’s strong USA proving program.

Today he’s reached another milestone being named a Second Crop success. Buckeye himself was one of the earlier BW Marshall sons to be proven at Semex, and quickly drew international attention as not only a mating sire, but sire of sons. Out of a VG-86-2YRUSA

GMD DOM 2* Rudolph dam, and then a 67,000 kg EX-94-2E-USA Luke, his family’s production capacity has transmitted through the generations. His emergence as a superstar on the international scene was due to his success on the TPI rankings and pedigree appeal with six more generations of VG or EX after the Luke, but also because of the tremendous promise dairymen saw in their Buckeye daughters.